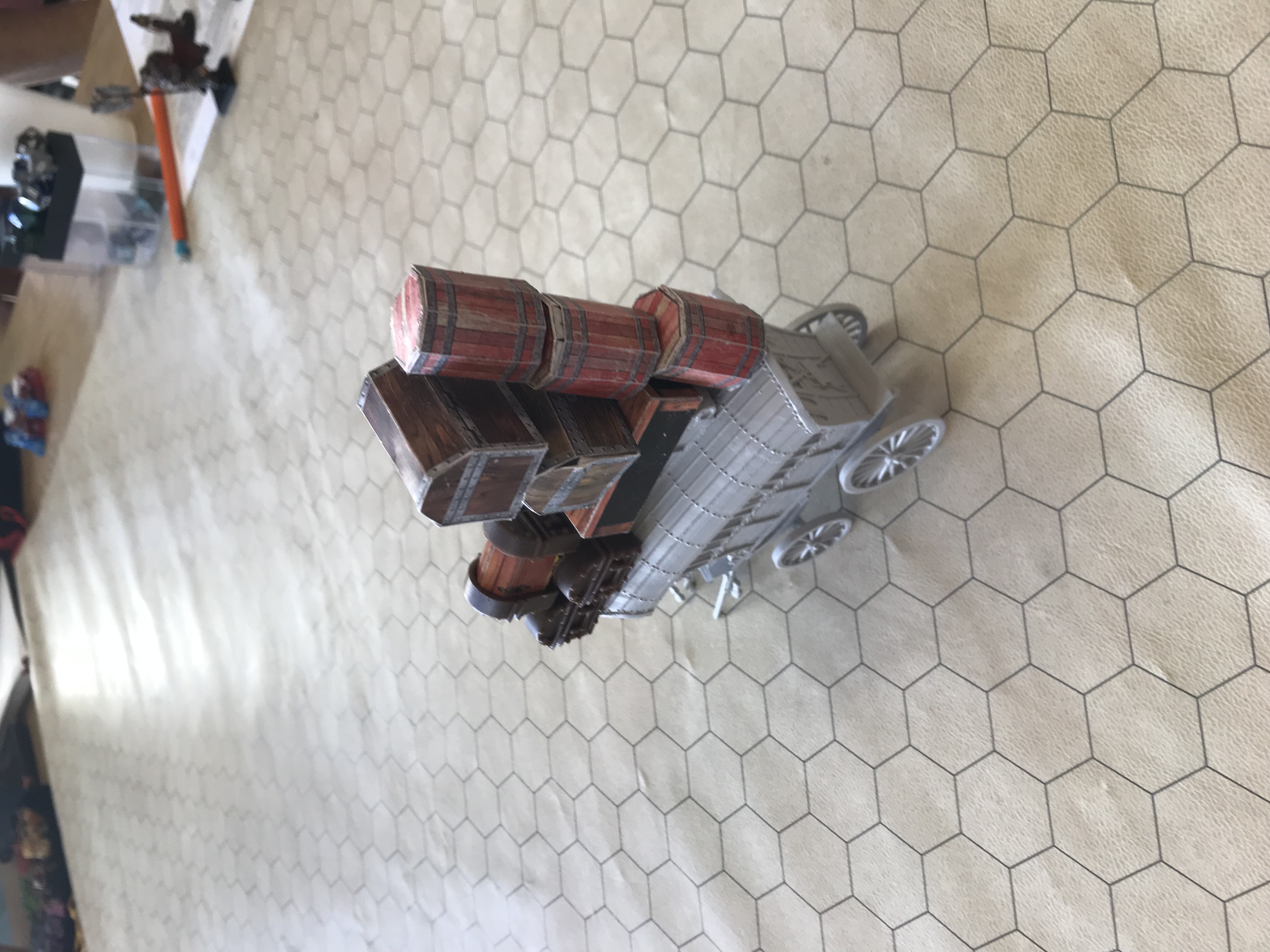 The Slavers defeated!  Freeport is once again, well Free!  The Grey Company overcame great obstacles to throw off the shackles of that dark league!  Oh, yeah, some other people helped too.

The Heroes of Silverton are an example of “others helping too.”  It doesn’t mean they didn’t do an important, and truth, a dangerous job.  No agent to get their names in the broadsheets.

The Heroes rescued slaves all trapped inside a room meant for half their number, water poured in and they were soon all to drown.  The Heroes stopped this nefarious plan and one of the rescued slaves, a druid named Opal, asked to join the group.

Recognized by Cob, one of the newest members of the Heroes, they added her to the group.  Roshanna who also put in a good word for the druid, having recognized her from that overcrowded room of hapless individuals.

Treasure found divided and traded again.  They piled all of it high atop a wagon and sent with the Overland Freight Company to their lair.  See attached picture.
Skeefer and Offbeat-Mustang had one last job for them to do, a little thing, a simple thing…  These things are never little nor simple.

Sent to a house, a house that held a mage of no small repute that had things inside that needed inspection and destruction.  Necromantic equipment.  Things that raised the dead, gave the dead a spark of life enough for mindless movement, or worse, commanded by the living to slay.  One more thing the Slavers needed to held accountable.

These somewhat brave men and women circled the dwelling.  Looking for ways inside not fraught with dangerous traps.  The Ranger and the Scout moved around the obvious entrance, the front doors.  Over the low wall, they entered the garden.  Who knows what horrible plants might grow within the confines?  They did not tarry to find out.

The Scout found the Silverton styled doors unlocked and found an egress.  A ballroom of sorts immediately set upon by a hellish beast.  A dancing instructor!
Caught in the harsh grip of this devilish creature, the Scout forced to dance.  A waltz, the tango and the dreaded Freeport Polka.  The music plays on, will he escape?

The newest member or the Heroes, Opal the Druid, also searched the area.  She moved in the opposite direction around the building and found the back door through a mud-room.  Searching the area, she found a water trough.  Confused from her ordeal in the slave pens, she mistakenly perceived (See how I did that?) that the trough scented with rose petals.

Instead of the blood that filled it.

Reaching into the trough with her staff, she found a poisonous snake.  The snake surprised the druid, the snake attacked and scored a vicious bite onto the druid.

Thinking quick and having raided other poor souls that had succumbed to the Slavers, she had taken poison antidotes with her.  Thinking fast, she took one antidote and could fight off the poison.

Searching out the trough she found a leather saddle bag.  What she found known only to her.  Perhaps this knowledge shared with all at a later date.

The Ranger followed the Scout over the wall, he did not stop at the Silverton doors.  He heard the Druids cry for help.  The only one that did.  Knowing she might be still frail from her time in captivity, and no thought of his own safety, he ran to her help.

A stout wall, over 6’ in height stopped him from giving immediate help.  He jumped, landed on the roof of the mud room, searched for windows or any egress into the building.  Foiled by good planning, building, and following code, forced the Ranger to jump down to the other side, he found a way in to save the Druid!

By this time the druid had saved herself, slaying the snake by bashing its head in with her staff.  The druid, ransacking the bags, left the ranger to his own devices.

Again, a door well-constructed, met code requirements, and locked from the inside with a bar foiled the Ranger’s attempt to enter.  He soon gave up and wandered around to a side door which did not foil his attempts.  This door still met the city code requirements it was unlocked.

The rest of the group entered the main entrance doorway and greeted by two dead bodies on the floor.  Each had their throats slit and missing their heads.  A foul reminder of why the group was here.

Exploration found several doors; the party was loathing to enter without investigating.  Dralen, one of the elf mages, had none of that.  He opened a door and peered in.  Spying a large room, he entered to investigate the odd purple diamond glow on the floor.

His curiosity was almost deadly.  This room was a spell casting room, allowing mages to attempt a spell repeated times to test and practice.  They had set it for Magic Missile.  Dralen found himself caught in the spell effects of the field of the spell.  Energy flowed in and out of his body, his hair standing on end, he finally slumped to the floor having taken serious damage.

While this occurred, Adrian too was examining his surroundings when the bodies on the floor, the dead bodies, re-animated and attacked the group.  Some gruesome spell in effect, appeared to be the heads returning to the bodies of the headless, grew to 5 times normal size and tried to engulf those they attacked.
Adrian, the first so attacked, found his head stuck in the vise of the skeleton.  Harald thinking quickly, using his now might axe, un-animated the corpse as it had become animated.  The others in the party slew the second in quick order.

Harald, now bored with this, and liking the quick action of the animated attack opened a door at random.  Someone had set a ballistae trap up, with a deadly frame of mine.  A bolt shot out from the device.  Harald, ever quick on his feet, turned, like a matador, and the bolt shot by him.  Things were not a fortunate for Dralen, he had JUST recovered from the spell field when the bolt slammed him in the chest and set him 84% of the way back into the Spell Field Room.

Harald, angered by the foul ballistae, took his anger out on the device smashing it.  Whatever foul energies lived in the thing, took exception with being smashed, in their dying breath exploded, causing frightful damage to the room and to the party.  Harald and Cob the Fighter taking the brunt.

Cob explored some after the explosion and found a set of steps that lead down into darkness.  He waited to see if the others would catch up.  Hearing different sounds of battle, he went to investigate, and this was when he took the damage from the exploding ballistae.  Ever an inquisitive fellow, he scouted and found a true oddity.

He found a doorway a blue beam protected.  This  immediately not confused with a Ley Line, it being completely different.  There looked to be a silver coin caught in the beam, the coin traveled back and forth within the beam making a “Vvvvoooomm” sound as it passed back and forth.

This mesmerized Cob.  He placed the tip of his magical longsword into the beam and attempted to touch the coin with his sword.  Much to his chagrin, this caused a reaction not unlike an explosion.  Cob flew through the air and into and through a wall.  He left an imprint of his body in the wall.  It would seem his armor, his new magical armor, once again saved his life.

Dralen, still angry over the Spell Field room, used his newly found magical robe to pull a 10’ pole from within its confines.  He too attempted to touch the coin, he too had found a similar reaction to his experiment, as he flew back and into a wall.  He was almost overcome with damage.

The party at this point decided it needed a plan and sat back to plan one.  The Scout was still missing, and party members scattered about the mansion.  What will happen next?  It should be noted Roshanna the Yuan-ti bard participated in the battle with the Headless Skeletons, attempted to bring down a section of a wall with a spell, and helpful to the rest of the party.  Yusiff had taken the day off to complete Rogue tasks.

And in case you missed it?  A link to the Big Battle, Donut Day

Electricy, Magnetism and Cannibalism, Oh My!