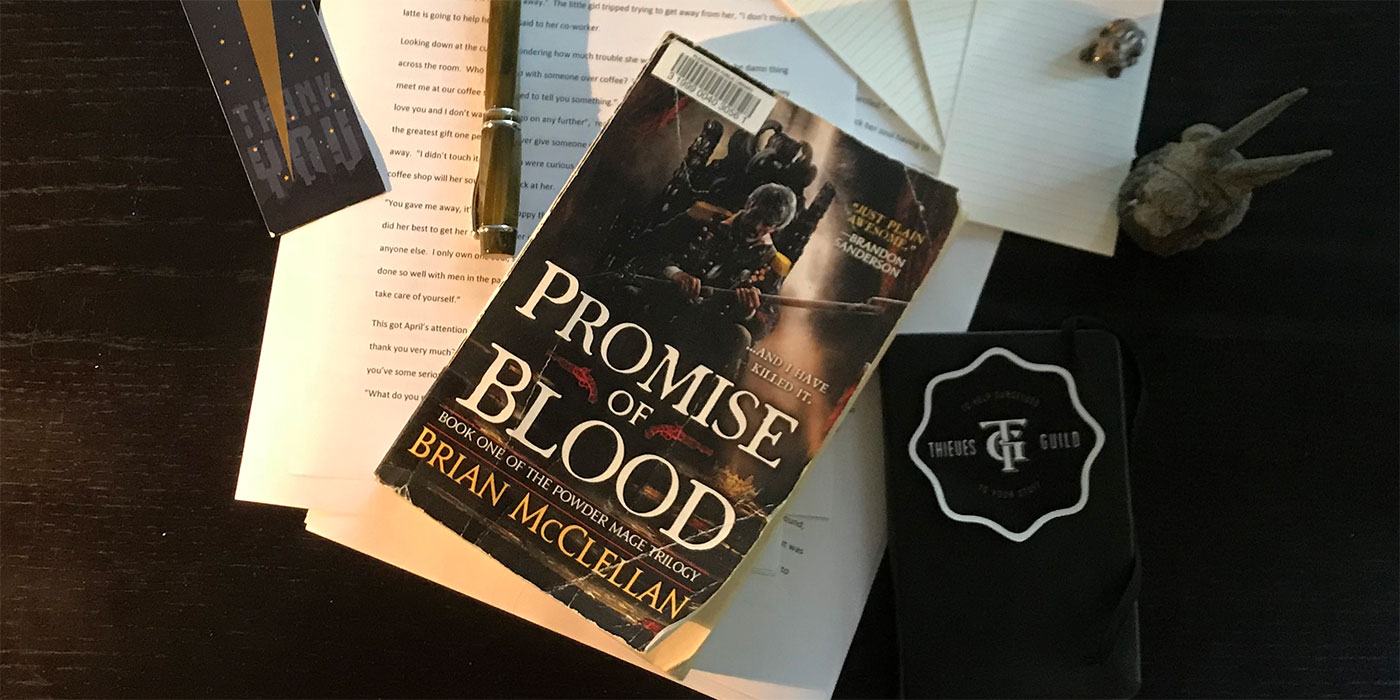 So, if you have been following along on Twitter this week, 3/26-3/29/2018, I have been taking some time off from writing to concentrate on reading.  I finished one of the books today and believe me I couldn’t wait to tell you about it; I enjoyed it that much!  If you know anything about my blog posts about books, I can’t keep from including spoilers from the story.  So, if you are looking for a recommendation of something to read over this holiday?  This is it.  Get this book.  I enjoyed it.  This has been my favorite book to read this year and it might be in my Top 25 of all time.  At least in the Top 100.

The book is titled “Promise of Blood” and it is by Brian McClellan.  I do have a word for the book, WOW.  Have you ever read something and seriously wished you had written it?  That would be me with this book.  The characters were interesting and not standard.  I would almost be hard pressed to pick a hero or even a protagonist for this book, cause it was like there were three of them.  Mr. McClellan did an excellent job of wearing the story back and forth between the characters, so I didn’t feel there was a time I was thinking; “Would you please get back to the other guy, this guy is boring.”  Each character had an important part to play.

So, let me get to the most interesting character, well to me anyway.  That character is Ka-Poel, who is a “Savage”, saved by Taniel who is a Powder Mage and one of the three protagonists in the book.  We meet her first as a hanger on, then we find out she is a mute as well as Taniel’s “Spotter”, and then we find out she is a strong mage.  The character keeps growing, we also find out Taniel rescued her from who knows what in her village, and even Taniel finds out that she is older than he thought and suddenly he was not seeing her as a waif, or someone he rescued but now she has turned into someone he might be interested in at the very least, having sex with.

The book handles the few adult themes in the book very well.  There is a talk of an orgy, of just spoken about rape, sex, infidelity, and all of it without the single use of a swear word or even an actual scene of sex.  Women might show up in a blanket, completely covered, or having just finished having a tryst of a sort, but the actual act is not portrayed in the story.  Thank you very much.  I can’t say that I am a fan of seeing sex in a story for titillation, call me a prude if you want.

Taniel, the Powder Mage, that I mentioned rescued Ka-Poel is also the son of Tamas, the second of our protagonist.  He is known for being a great shot with his rifle as well as being Tamas’ son.  We are supposed to like him, feel a bit sorry for him since his finance sleeps with another man.  Taniel finds out about this, goes to where the couple is, takes the engagement ring that he has given her, skewers her lover with the man’s own sword and leaves the ring imbedded on the sword and in the man’s shoulder.  Ouch.

Taniel is also an artist that keeps a sketch book of people he has met, people that are important to him, he references the book a lot in the beginning of the story and it becomes less important as time goes on.  Taniel is also known as “Taniel Two-Shot” since he is able to kill “Privileged” those with the ability to use magic, easily it would seem with his rifle.

Another important portion of this book, and which makes it a bit different is the use of black powder, and how that the gunpowder is used in magic, that people sniff it, not like cocaine, more like snuff?  Snuff is a powder, usually a pepper like substance, that was in a lot of use in the 16-19th centuries.  I’m not telling any secrets here when I say that author uses background information from the Napoleonic Wars for some of the story here.  There is an interview at the end of the book where he says just that.  Plus, that he had watched the TV series “Sharpe” with Sean Bean, written by Bernard Cornwall and had gotten some inspiration there too.

OK, back to the characters, Tamas is a general in the army that gets fed up with a bad Adro King, has him beheaded, not unlike the French Revolution, along with the king’s queen.  There is some insurrection as the Royalists don’t like the idea of Tamas overthrowing their way of life, a vast majority of the nobles are killed off, their lands confiscated, and given over to a mercenary army, that was based in the kingdom of Adron, and the mercenary’s officers.

We also have Mihali, who is both a cook and a god.  Yep, you read that correctly a cook and a god.  Through a good portion of the story you are trying to determine if the character is insane and claiming to be a god or sane and is actually a god.  Spoiler!  He’s a god.
The last of the protagonists is Adamat.  Adamat was a police officer in the city of Adopest, the capital, has a family, tried to start a number of business, which all failed.  The last one a printing business, the printing press exploded, and he owes money out.  He thought he had a deal with a friend, found out he didn’t have a friend when the so-called friend so the debt to a loan shark, who was then pressing for the money, quickly.

That loan shark meets an untimely end, the debt is picked up that that bad guys boss and tries to put the squeeze on Adamat.  Now why this is interesting?  Adamat is hired by Tamas to find out who Mihali is, and perhaps if there is a reason for people to be after him, without mentioning the god hood.  Adamat does this, then is tasked to find out who the traitor is on Tamas’ council.  From there it gets really interesting, the bad guys have Adamat’s family more or less held hostage, cuts off the finger of Adamat’s son, and wants him to report to them before reporting to Tamas.

As I said a good book.  I like that you don’t need to take notes, Mr. McClellan keeps the pace going and gives you enough clues in the story to keep you focused.  The book ends with the good guys, wellbeing the good guys and a vast majority of the sub plots are pulled together.

We are left with Taniel in a coma, Ka-Poel probably a live, Tamas wounded but recovering, Adamat in trouble for not being 100 percent truthful and the big bad guy either dead or at least not in the picture.  One of the characters more or less sum things up with an answer that goes like “Taniel can’t kill a god with a rifle.”  Taniel had shot the god, with two bullets, one in the stomach and one in the eye.  This is not the reason why he is called Taniel Two Shot, but it definitely sums up his skill set.
I’m going to add that there is a good wiki page; http://powdermage.wikia.com/wiki/Promise_of_Blood that I used for this post to help remind me of details.

I am hoping that today I will find the time to run to the library to get the second book; “The Crimson Campaign”.  I’m going to take a wild stab at the thought it is named that due to the amount of blood spilled.
Happy reading!

Do let me know if you agree, disagree, or have a comment and email or let me know on Twitter!

Writing That Book You Just Know The World Needs.

Sunday Roleplay, and Open letter to the group cause Meetup thinks my post is too long