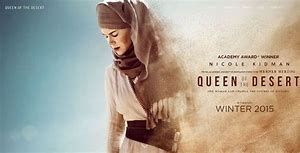 Film Review Queen of the Desert

Have you ever watched a movie, and you wanted it to be really good?  I mean the story that the movie is based on is rich; the characters are deep, the landscape where the film is created is so vivid it would be impossible for it not to be a great movie?  Yeah.  Sadly, “Queen of the Desert” is exactly that movie.  I mean by being that movie, it falls flat on its face, the story is muddled if not boring as all get out and I have no idea why that is.

Gertrude Bell is the focus of the movie, she is the Queen of the Desert.  This real-life heroine in a time of heroes did so much that influences the modern Arab world today it is amazing.  She is the one responsible for the boundaries of what we call the Middle East today.  She helped pick kings of the region, the Bedouin people think of her as one of, if not the only foreigner that understand them, she did, and she did this by listening to what the people had to say.  She thought of herself as a poet, but more in the way Virgil is a poet that he would name things, not in the way a lot of poets describe things.  Yes, these are not my words but taken from the movie.

I chose to watch this movie because of an article I had read in one of my military history magazines, I don’t have it with me or I would find the issue and quote it or at least give a link to it.  The movie and the article cover the same material, gladly they don’t follow the same script.  The movie spent far too much time on the men that came into Ms. Bell’s life and not enough on the experiences of her life.  Miss Bell learned to speak the local languages, knew the customs, and treated the people with respect.  The movie barely makes a feather pass at these important facts and makes it seem more like something that she was born with.  This was well done at all.
If more time would have been spent showing the audience about her experiences in learning the local languages and customs, I think this could be a much better film.  She meets and has an intellectual relationship with T. E. Lawrence, played by Robert Pattison, who does an outstanding job in this role.  I wasn’t expecting much but Mr. Pattison shined though as the slightly odd Lawrence.

Perhaps part of the problem is how the film is produced?  There is, for example, a long list of the European actors, pictures included.  Those actors portraying; Abdulolah, Fattuah, and Fatima get a named credit but no photo.  The actor’s names in order are; Younes Benzakour, jay Abdo, and Nadia Niazi.  These of course are not the only actors that aren’t European, just the ones that I easily found on Rotten Tomatoes.

This movie was, and I am having a hard time saying this, was bad.  It wasn’t the fault of the stars, Nicole Kidman was a perfect choice for Gertrude Bell.  I like James Franco, I can’t say I enjoyed him in this role in the least.  His character reminded me of someone that you kept waiting for him to be caught doing something wrong in some way or another.  I can’t put my finger on it, exactly, just a feeling.
Perhaps I can sum this up by one scene in the movie that wasn’t needed and I’m not sure if the director put in to give it a PG rating.  There is a scene where Nicole Kidman is in the desert and she is taking a bath, I am sure that in the time period it would be normal for a woman to take a bath fully clothed, this is still Victorian times after all.  World War I had not started yet, the Ottoman Empire is slowly falling apart, so women in this timer period didn’t go around getting naked to take a bath with a bunch of men around them in the middle of the desert.  That part I get.  No, but the director made sure to film this segment where we saw Ms. Kidman’s chest.  It wasn’t needed, it was more for the PG rating that adding anything to the movie.

Yes, somewhere along the way I have become a prude.  No idea where.  At any rate.  Don’t waste your time with this movie, read something about Gertrude Bell, I wasted the time for you, so you don’t have too.

A Review of "Twilight Falling" by Paul Kemp.