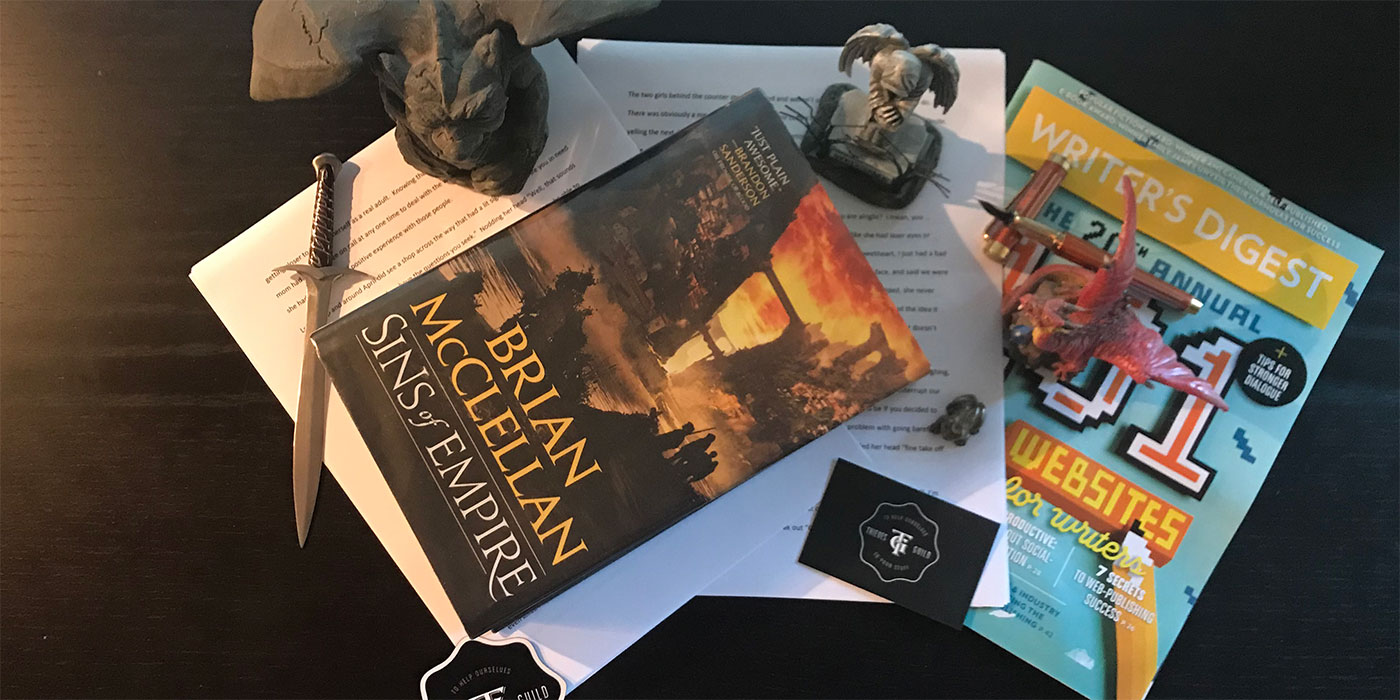 “Sins of Empire” is a good book and a good read.  There.  I’m going to guess that is all anyone would need from a book review, right?  The important part is done.  The book is good, you should read it.  Oh, you want to know why, too?  Wow.  People want everything now, sheesh.  Fine, let us delve just a little deeper.  Spoilers abound, you are warned.

First, from the previous three books we have Olem and Vlora/Flint.  When I started reading I admit I was disappointed.  I am not sure about anyone else, I wanted all Taniel Two-shot all the time with Ka-Poel.  I admit it, these were the characters that interested me, and I wanted to know more about.  In the three previous books I wanted the story to be about them.  I read sections of the Powder Mage Trilogy, to get to the parts about Taniel and Ka-Poel.  When I started this one I was close to yelling at the physical book.  “You best have more Taniel buddy.”  I will spoil it for you and say yes it does.

Vlora now known as General Flint is the leader of the Rifle Jack Mercenary Company.  They walk into one problem, then another.  It is not a group you want to join that has a long-life expectancy.  There are not characters dying off, the un-named mercenaries though drop like flies.  Olem, using his Knack of not sleeping and Vlora being a Powder Mage, have their work cut out for them.  The Rifle Jacks get hired to track down and capture Moma Palo, the mysterious leader of a faction with thoughts of Civil War.
There are a lot of characters, Michel Bravis is in the top five most interesting.  The character is a neurotic spy.  Michael has whole conversations with himself, out loud.  He is part of a semi-secret organization called the Blackhats.  Now one thing that the author doesn’t do, is hide the names of the good guys or bad guys by having non-describe names.  The reader can tell right away who the good and bad guys are pretty much from their names.

Ben Styke is next.  I admit, when I read this character’s name?  I rename him to Ben Stryke.  To me it flows more.  He was the leader of the Mad Lancers.  In the past his name was Colonel Mad Ben Styke.  He had enchanted armor that blocked most attacks.  It is hard I to be fearful if you knew your armor protected you from most hits.  He wouldn’t follow an order, found guilty and sentenced to death.  He was shot at twice by firing squad, wouldn’lt die, so sentenced to a labor camp.  It is now ten years later.  He has more or less adopted a young girl, Celine, whose father, a thief killed in the camp for being, himself.
This personalizes the man a bit, gives him a soft side, and a reason to like him.  Who doesn’t like a big bear of a man protecting a little girl?  Nobody.  Celine, trained to be a thief, does her own thing, and I liked the character.

Those are most of the characters.  None of them die, they each get their time in the son, and by the end they are finally in scenes together.
Fine, I will mention in passing that Taniel and Ka-Poel do make an appearance back in the story.  I thought I had spied where Taniel was, I was right.  I completely missed Ka-Poel and thought she was someone else.  When that character died?  I figured out quickly that I was wrong.

An amusing, to me, side note.  When I returned this book to the library, I wanted to know what the next book was in the series.  I go to the catalog and find out my local library doesn’t have a copy; 5 other libraries do.  I try to reserve one, I can’t.  I go to the Services Desk to find out why.  The reason?  It hasn’t been published yet.  I was amused and slightly embarrassed.  I do have my request in for when the library gets one to lend.  Feeling a little foolish for wanting a book that has yet to be published. Heh.

I am also going to look for “In the Field Marshall’s Shadow” a collection of short stories, one being Vlora’s story right after her, cough, indiscretion where she was no longer engaged to Taniel Two Shot from the first book.

Addendum.  Searching for this book I could not find it in any library.  I broke down and purchased it for my Kindle.  There might be a review coming up.  Maybe?  What do you think?

Till later, keep reading, keep writing and thank a librarian.  I will.