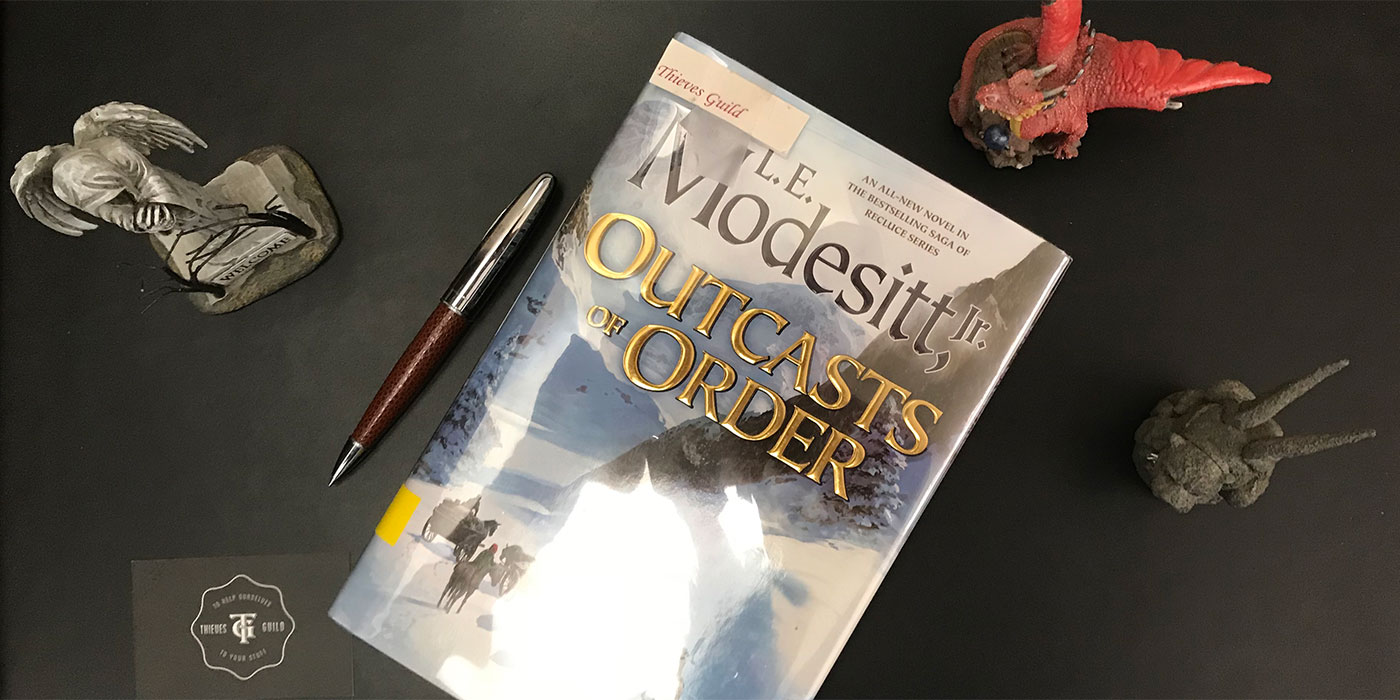 I read a few of the reviews that complained that Mr. Modesitt let them down some because of no “action” in his story.  Now, granted?  There aren’t any of the large battle scenes that a reader of the Recluse Cycle stories expects.  There is a couple of fight scenes, nothing grandiose, granted.  Can I be honest?  The fight scenes in the other books aren’t all that harrowing.

White mage tossed chaos bolt, Black mage takes a moment, throws it back, White mage dies.  Sure, might be more tossing back and forth, most of the time?  Black wins.  It goes a little further than defender wins all ties, but not a lot.

The story of Recluse has always been a philosophical journey.  Not always Good vs Evil.  I have found his stories to be more about a moral good vs a personal good for/to me.  People in power want more power, more gold, more “things.”  The lead in most of Mr. Modesitt’s stories?  They want to be alone to pursue their lives.

Beltur, the Black Order mage from the last book “Mongrel Mage” is back and is trying to live his life in Elparta.  He does what I would call police work, keeping thievery down, I won’t hold that against him.  I mean good to keep thieves on their toes.

The powers that be in Elparta find they fear him, he was one reason they could win against the Gallosians.  For more on that story, read the “Mongrel Mage.”

So, we have Beltur here, trying to earn a living and court?  Date?  Jessyla a healer.  Now she is beautiful.  Yep, she had red hair and green eyes.  Yes, she is a healer and yet another mage that wants to consort/marry her.  I got that women don’t always get to say no when a man wants to consort with them.

So, what did I like?  I enjoyed the descriptions of the healing process.  I could picture what was going on, now the healing worked, and was descriptive enough for me.
What didn’t I like?  The forging.  He works with a coppersmith, Jorhan, to make a specific metal which is hard to make, considered almost a unicorn like thing.  Cupridium.  It is all shiny, hard, can a mirror or made into a sword.  Over and over gets a simple pass.  “Merging the chaos and the order.”  Mr. Modesitt took his time with the healing, with the forging a quick glossing over.  Disappointing.

Also, a small amount of teaching that goes into showing a young girl how to create shields, light a candle and a fire.  This was OK?  It had not a lot of detail, it was more than the forging and less than the healing.  I, personally, would have appreciated more time being spent on describing this.  Laughing now, I mean if you will not have a big battle, discuss the weather a LOT, why not take 5 minutes and explain how the magic system works?  Right?

There is a couple of fight scenes, really more of a quick one-two punch.  The novel is a complete set up for the next book.  The group settling in Haven.
I used the provided maps a LOT during the time I was reading it and at times they made little sense.  Beltur talks about how Westwind is still a place, he can’t go there being a man.  Recluse, founded until Creslin left and then Westwind fell.  Obviously, this portion of the story of Recluse has not happened yet.  Characters from “The Fall of Angels” are referred to as people of history, not people out of legend.

It isn’t horrible, looking at the maps though made me think which took me out of the story.

This is not a book that does a lot except to set up for the next book.  It isn’t a bad story.  It could have been a lot shorter, far too much for my tastes about the weather.  I get it, weather bad.  People hungry.  Politicians are evil.  There were times I felt hit over the head with a sledgehammer.

If you enjoy the Recluse books?  You will like this one.  It won’t be your favorite, it won’t be a book you go back to, to read again and again.  It moved the story forward, albeit, slowly.  I should mention I took three days to finish it, one of those days the book trapped in a car and I couldn’t get to it.  So, go read something from the public library, I did.

Zero Day by David Baldacci, a review with spoilers and stuff