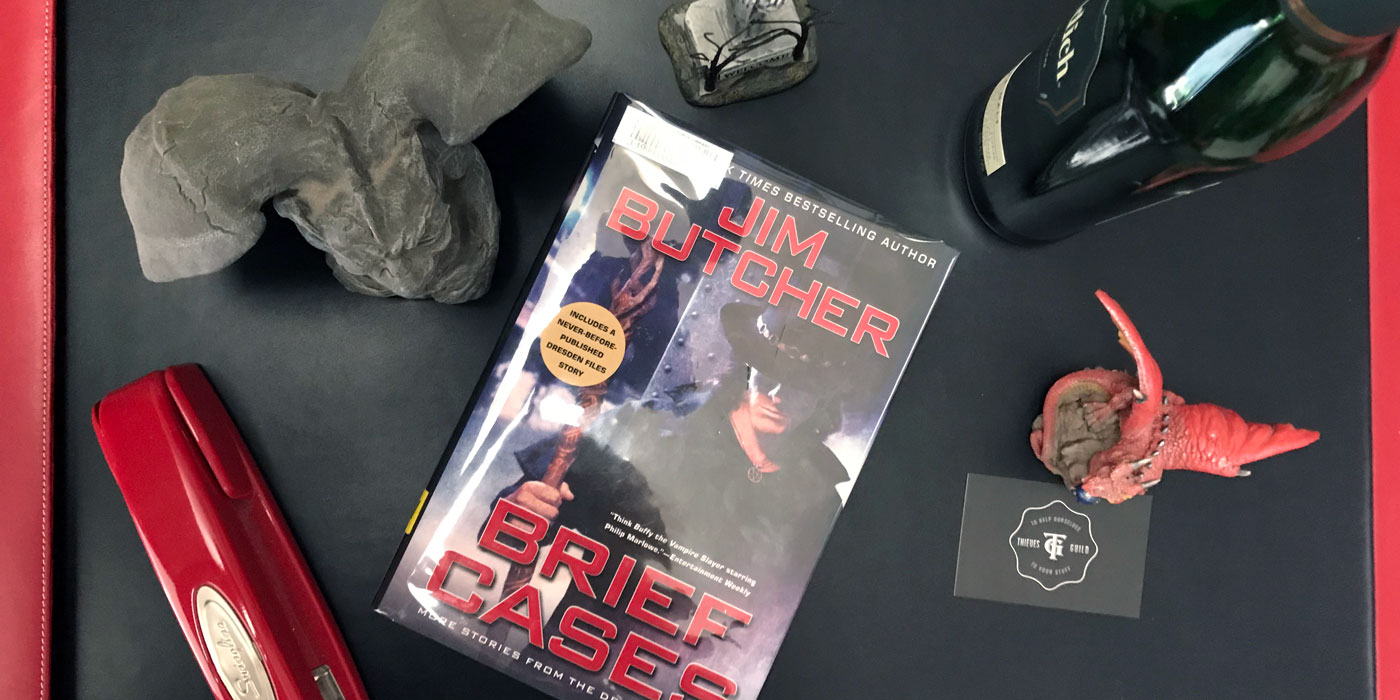 Yay!  “Brief Cases” was in print and at the library.  Requested, waited, arrived.  This was the good part.  Leafing through the book I found myself a little less pleased.  Here is the reason.  There are a few Big Foot stories included.  I like Big Foot Stories, and Mr. Butcher’s Big Foot stories are a great read.  My problem?  I’ve read them before, in fact, I have even read them in an anthology of Big Foot stories, and standalone stories in other anthologies.

Back to the complaint.  Still, for a $28.00 book, $6.90 is a lot of money for 3 already published in other books/anthologies, and their own collection, isn’t it?  I am a huge, HUGE fan of Harry Dresden.  I would have to say I’m a big fan of Mr. Butcher.  Confession “I am not a fan of the Cinder Series, “The Aeronaut’s Windlass”, the story didn’t hook me, I am not an enthusiast of talking cats.”  I found the Codex Alera series very readable, in fact, I scooted to the bookstore as soon as I finished the previous book.  Yep, BOUGHT them.”  I am no one-trick pony with Mr. Butcher’s work.

The quick and dirty of the review?  I enjoyed the stories I had not read before.  I enjoyed “A Fistful of Warlocks,” didn’t have Harry in it at all, that wasn’t the reason I enjoyed it.  This reads like a Steampunk Story, set in the Old West, that I enjoyed.  As Mr. Butcher writes about in the intro, Anastasia Luccio deserves a story of her own.  A good “taste” for the other stories to come.

Spoilers, Spoiler, Spoilers, you get the idea, Spoilers.

I’m skipping B is for Bigfoot since I did not read the story in this anthology.  From my previous read?  I liked it this book is an interesting read.  I never felt cheated in the stories, the descriptions are excellent, I knew I was in a Harry Dresden story liked the repeating quote, paraphrased “On thing is a problem, multiple problems are an opportunity.”  Yes, I spent way too much time skimming through the book to find the exact quote.  You get the idea though.  Seems when you have multiple problems?  It is a way of saying “I will blast it.”

The “AAAA Wizardry” enjoyable, explaining though flashback scenes the process that Harry goes through with a group of new Wardens.  I can’t say this is the strongest story of the lot.  Didn’t hold my attention I could not tell you why.  Not saying it was bad, not the best.

“Curses” I had read before, about the curse on the Cubs.  I am surprised it took this long for a wizard-based in Chicago not to get rid of the curse that kept the Cubs from winning the big games.  Being a HUGE fan of Fae stories, introducing Welsh Fae?  I was all in.  I hadn’t realized I had read this story before until the one-quarter mark.  By then, I enjoyed this too much not to want to read to the end, I did was well worth it.

“Even Hand” is Gentlemen John Marcone’s story.  The only human to sign the Unseelie Accords.  Which makes him rather formidable.  It doesn’t hurt he has Gard, a Valkyrie, and Hendricks, I am not sure what I would call Hendricks besides scary.  The two of them working for him, Gard’s job to protect Marcone, Hendricks to handle the day to day job.

Justine, Thomas Raith’s lover and Thomas being Harry’s brother.  If you didn’t know this already I am not sure what book you haven’t read first.  Anyway, Justine is one of those characters that keep showing up in the stories throughout this anthology.  She appears often at first not to know what is going on, or a pawn in the game being played.  I am of the mind she knows what is going on, that she knows someone is trying to use her, and she gets back at them by knowing.  Doesn’t hurt she is beautiful and uses her looks to her best outcome.

I enjoyed this story, showed plausible ways for the mundane world to overcome magic, a little water, and claymore mines go a long way.

“Bombshells” is the first Molly Carpenter story in the book.  Molly, as you might recall, is Harry’s apprentice.  She is also his want to be lover, he turned her down, she hasn’t given up hope yet.  I appreciate that they aren’t.  He is old, she is young and the trope of the guy with the young girl is overdone and a little, creepy.

This story is written from Molly’s point of view is the second story in the collection written from a woman’s point of view.  The first being “Fistful of Warlocks.”  Mr. Butcher does an OK job.  I mean the voice doesn’t sound a lot different from Harry’s.  I can’t say reads like a man trying to imitate a woman, I will have to think about this.

Justine makes another appearance in this story.  Was one of the other enjoyable, stories in the book.  I think I also like Molly and want to read what she is doing.  Molly’s interactions with Leanansidhe, Harry’s faerie godmother, yes, I enjoy writing those words, is great.  I like a character who is not evil or good, one with her own agenda.  There is something about a character that doesn’t lie but never seems to tell the truth either.  Very engaging.

“Cold Case” is another Molly story and explores more what it means for Molly to be Lady Winter.  Mab, the Queen of Air and Darkness makes an appearance to show Molly what it means to be in the Fae Court.  The story itself is interesting,  the ending which has not a lot to do with the big fight scene, these stories have a big fight scene, this one does, the epilogue though is what is more telling.  Mab lets Molly know in no uncertain terms what it means to be in her post.  A stark difference between Maiden, Mother, and Crone.  Molly is the Maiden, and that does also mean virgin.

I liked the Cthulhu overtones in the story too.  I find that I enjoy those more as I get older or weirder with age.

“Jury Duty” was fun.  It is a fun Harry Dresden, old school, detective story.  Harry annoyed that he has jury duty, senses that something is wrong with the case.  Does legwork, figures it out, rights the wrong, all is right with the world.  Fun, no sudden twists, a solid story.

“Day One” is a Waldo Butters story.  Introduced as a speckled man, the medical examiner, and polka dancing shy guy to a Knight of the Cross.  Taking over for Michael Carpenter? Big shoes to fill if I say so myself.  Do I think Waldo can fill a book by himself?  No, I don’t.  I didn’t mind this story, it didn’t hold my interest as much as the others did.

“Zoo Day” is the final story in the group, and yes one of the best.  Harry taking Maggie to the zoo. (Maggie is his daughter he didn’t know he had.)  Not a huge deal, right?  It involves Harry, so something will happen.  The story is interesting told three different times from different perspectives.  Harry, Maggie, and Mouse.  Yep, Mouse gets his own voice, his own story, and the view from a dog is interesting.

I find I like Maggie, a lot.  Find myself intrigued with whom she will become, like her voice, a LOT.  Her story about fighting the bad guys, using The Book, the little explanation what the book is?  This, I hope, will remain important.  I also hope she doesn’t grow up to fast.  Interesting character and fun to have a younger viewpoint on things.  You can never have enough eye rolling.

Mouse, who doesn’t like Mouse?  If you don’t?  I don’t think you should read these stories.  Mouse doesn’t disappoint as a storyteller in the least.  He is someone I could enjoy a longer story based on his exploits.

Harry?  Harry is being, Harry.  A young warlock in the zoo, Harry notices him from the anger he is giving off, he is also a good twist since the warlock is in the Mouse story too.  I don’t think I’m giving anything away that all is well that ends well.  Plus, it terrifies Harry being a father, a bad father, and that is endearing.  I mean, face it?  Is there something that Harry will do wrong if he sets his mind to?  I doubt it.
Wow, one of my longer reviews.

My recommendation?  Find out how many of these stories you have read and figure out your price point.  It is what I did.  Then?  I went to my local library, checked the book out, and read the stories in about a day and a half.

If you didn’t notice?  I will point out I didn’t review the Bigfoot stories in this review.  I didn’t feel right about a review if I didn’t read them in this collection.
If you must own everything Harry Dresden, I doubt my thoughts on money will have little effect on you.  It isn’t horrible, I am thrifty (cheap) and the $28.00 price point is something that made me stop and think.

The next book in the series, “Peace Talks” will be out… later?  Soon?  I will look forward to that.  Till next time, go to the library and get a book.

Electricy, Magnetism and Cannibalism, Oh My!

Review of the podcasts; "The Worldbuilder's Anvil", "Threadraiders Podcast", "The Writeship Podcast", and "The Strange Case of Starship Iris".