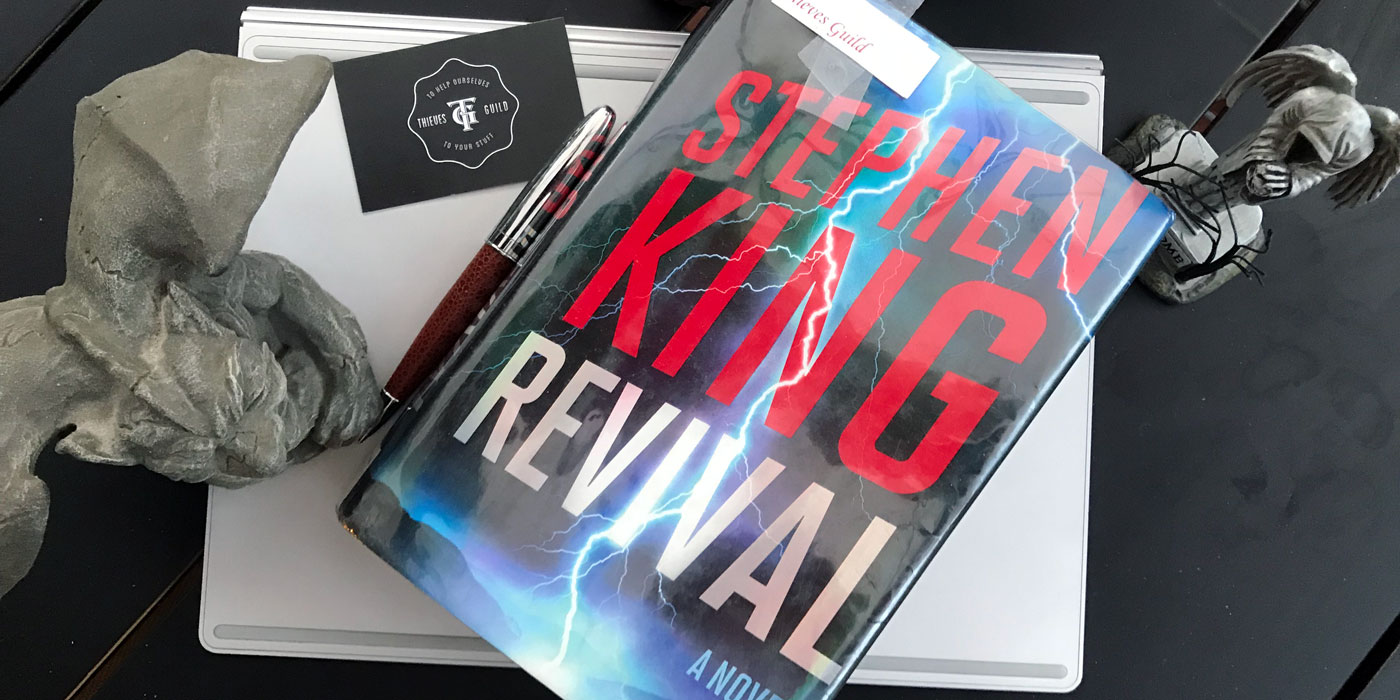 The next book on the review list is Stephen King’s Revival.  I should start out I am a limited Mr. King reader.  A lot of his stories don’t get me in the first few pages, I have enjoyed The Stand, The Eyes of the Dragon, several of his short stories and On Writing, A Memoir of the Craft.  I attempted on a couple of occasions to read The Dark Tower, I couldn’t do it.  The last attempted book was The Wind Through the Keyhole.  I had an issue with the language, a lot of words specific to his stories and they kept taking me out of the story.  I have since found that I own this book, and will take another stab at it instead of borrowing it from the library.  OOPS

Now, having said all of this, we are at this book, Revival, A Novel, let me first say, with no spoilers?  I not only liked the story I liked it.  I, at first, was reading in spurts, 10 pages here, 10 pages there.  Not the book's fault, busy with lots of stuff.  I got to a point though in the story where it grabbed my attention and would not let go.  I find I am that way with Mr. King’s stories.  Either the stories grab me, or I’m wondering if something better on Netflix or on my bookshelf.  I am sure we all have people like that in our lives too.


First off?  I expected with the title “Revival”?  I expected it would be something about a church, in the tent, in the Midwest revival story.  Something about God, a question of faith, perhaps some lightening, there is lightening on the front cover.  Some sort of spiral from a lightning storm.

It is, and it isn’t.  The odd thing is, Mr. King goes back to his roots and writes us a Tale of Cthulhu.  He has written a few Cthulhu-like stories in the past and this one does not fail to scare the stuffing’s out of a person.  Mr. King writes about The Great Ones, that they eat mankind, that the world they live in is far more horrible than anything in a Dark Tower book.

The story spans the lifetime of Jamie Morton and the action starts when he meets the new minister Reverend Charles Jacobs.  The little kid and the rev. become friends, I almost want to call it a Batman and Joker type of relationship.  Symbiotic in some ways.  They fall into and out of each other’s lives over decades.
Rev Jacobs is all about electricity, even now as a new minister.  He and his young wife, Patricia or Patsy, a beautiful woman and their son Morrie lead what looks like an idyllic life.  He preaches, she plays piano, nice kid, this is a Stephen King story, so it can’t stay nice for long.

In Youth Fellowship he shows off his electrical experiments, all benign.  Things are rosy until Jamie’s brother loses his voice in a stupid skiing accident.  No one can help him; the brother Connor and things look bleak.

Rev Jacobs to the rescue.  He soon explains he knows he can help, with the use of a little electrical current.  With no one else with a plan, Connor hooked up, given a small shock, and the family waits.  Jamie feels something, like a door opening.  He isn’t sure why it makes him uncomfortable.
Fast forward, Rev Jacobs wife and son die in a horrible car accident, there is talk she had been drinking.  Personally, I don’t think so, rumor mongers.  He gives, referred to in the rest of the story, “The Horrible Sermon”, loses his job, his faith and moves away.

Jamie finds music, a girlfriend, loses his virginity.  Turns to drugs after a while, gets hooked and has a horrible couple of years.
Jamie falls apart, he still plays music, he doesn’t remember details of the time, he wakes up, scores, plays, scores again, falls back into a bed in a seedy motel.  The drugs get so bad he gets left behind at a fleabag hotel by the band he is with.  He doesn’t have enough cash to score drugs and pay for another night.

He finds that Jacobs is having a tent revival at the local state fairgrounds.  -Personal Note- The revival?  This is what I thought the book was about the whole time.  Something about having good old mid-western tent revivals, hymn singing, the whole bit.  Nope, not in the least or not really.

As Jamie enters there is a lot of things going on, the big thing is?  People are here, and they think they are being healed.  Jamie doesn’t buy into it, he does though get Jacob’s attention.  Jacobs sees that Jamie needs help, he offers to “cure” him.

The cure is a lot like what the Rev did for his brother Connor.  He hooks him up to not electrodes, but bands of metal.  Now, I kept waiting for the words “Tesla Machine” to come out during the book, it doesn’t, I felt that the author described that, a lot.  Zap, zap, it cures Jamie of his drug addiction, he did though have an experience.  The same experience everyone else has in one way or another.  His mind opened to another dimension and he saw either “The Real World”, “Heaven” or “Hell” It doesn’t matter what I call it?  It’s horrible.

Not wanting drugs is a great thing, not being addicted.  He though sleeps walks, loses parts of his memory of what he might have been doing.  The Rev tells him this is a short time side effect.  When stressed he has visions of the other side.

The book gives examples of what it is like to play music, young love, and drug addiction.  Recalled that from Mr. King’s memoir, “On Writing” that he himself has a problem with drug addiction, I also know from interviews he enjoys playing music.  We all have been in love.  I hope we can all recall our first love in the same way that Mr. King portrays Jamie’s. with Astrid.

I will leave the end of the book un-spoiled for everyone.  It is that good of an ending.  I did not see it coming the exact way that Mr. King portrayed it and the plot twists and turns made the book even more enjoyable.  This is one of those books I would suggest in the strongest of words?  Don’t give up on it.
This is one of the scariest stories I have read.

What do you think?  Let me know.  Now, go to the library, pick it up, read the book or any book.

Dreams. Inspiration or just one more proof I am ....