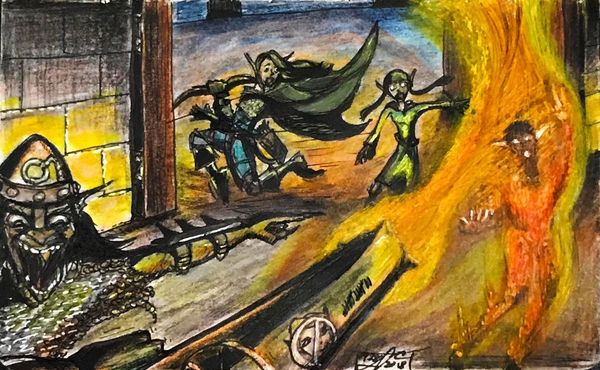 “Fine, I’m Whipple and I’m the Historian for the Grey Company.  I am taking over for Cutter because he claims he needs more time to “cut” people than to keep writing the important stuff that is happening.  I got this job, not due to any great skill at putting ink to paper, I got it because I am one of the few that can read and write and I once said, like an idiot; ” Boy, wouldn’t it be fun to be the guy taking notes during the big meetings cause then I would know everything.  “Idiotic.”

Crem brought it to Cooper some farmers were missing from the valley.  A patrol sent out found out more than a 100 people missing.  The Commander decided this needed looking into, he sent Corvus, Wotan, Solemn and me to determine what was going on.

We followed the trail to Freeport where the farmers that had entrusted their safety to us, taken by Slavers.  Soon we had the compound under scrutiny and we waited.

Wotan, is the not so much brains of the group decided that we needed to bring a bunch of the Company down and hit the Slavers where it hurts, in the pocketbook.

Freeport is on the border between New Nython and Nython.  New Nython, being free now and under the influence of Goldia and Greyton…  You get the picture, right?  Yeah, the Grey Company would do a little land grabbing and get a city with a port.  Who didn’t want to play sailor man?  It would be me, I get seasick in anything bigger than a bathtub.

We set up across the street in the back end of a rooming house.  Wotan paid the owner, Sleepy, I kid you not that is his name, to rent the whole place.  It would annoy the Commander that Wotan spent the coin so easily.  The only thing that would make it all right with the man would be a successful return of the farmers.

Corvus picked a room that had a good eye to the front gate.  Few people did a lot of coming and going for a while.  We spied people eyeing the front gate, they might be not to bright thieves.  We were wrong.  Not a little wrong, I mean covered in donkey poop wrong.

About mid-day, a day or two before the Company was ready to strike?  Corvus called down a group of people at the front gate of the Abbey.  Maven had showed up she gave the group a stink-eye.  “Something isn’t right there, there is a Slitherer with the group, I’m not getting a vibe it’s supposed to be there.”  “What does that mean?” from Corvus.  “Hey, you are all the big planners, I’m just a woman, ya know?”  Corvus and Wotan rolled their eyes.  “Yes, your Empress.”  They both got the stink-eye at that point.

An explosion happened next.  I admit I liked that someone besides us set off a trap or whatever, the flame shot out of what looked to be a hose and incinerated people.  A full-blown general melee took place.  I sent Cooper over to investigate.

Cooper’s report to the Histories…

“You getting this right?  You are copying down everything I say, right?”  Often members of the Company are certain I’m changing the words they tell me.  No matter what I say, they need to make sure that their words are getting copied down the way they say them.  Back to Cooper.

“Fine, fine, well the first thing I noticed, Ded?  Yeah, him or his twin brother or something.  Right?  Anyway, I told Wotan.  Wotan said to keep an eye on him, he might run his own game for all we knew.”

“Anyway, the Slitherer, and the others went into the Compound.  Yeah, Yeah, I’m calling it a Compound, I know it was an old Abbey and all of that but sounds too nice for a bunch of Slavers.

The Fire Wagon and the Ballistae were both fired off and the group inside were in some battle.  I signaled to Wotan something was up.  This pushed our plan up by two days.

I later learned that a guy named Harald, you know the one, big freaking axe guy?  He went through those orc bastards like a hot knife through butter.
The Slitherer?  Yeah, she, yeah, it’s a she.  Damaged some orcs.  Someone said she casts spells too.  Told her name, Roshanna.  There was a problem in the room where the Slavers did their business?  I didn’t see what, a big old melee took place.  Things got so crowded that the Cob guy tackled the Slitherer and like took her down.  So, he could fight, funny right?

An honest to goodness elf mage named Adrian, casting spells like they were going out of style.  Took down a bunch of orcs, we need more mages in the company.

They had a sneaky little bastard too, he would backstab people when they weren’t looking.  All for backstabbing you know.  Everyone should know how to do it.  I found out later his name Yusif.

Another of the big guys there?  Mean bastard name of Cob.  He used his sword like it was a toothpick or something.  We should sign him up if he lives.
Now, while this stuff is going on?  Yeah, two people are walking down the street.  A big old bolt gets fired from a giant crossbow, a wagon with a fire hose, I mean a hose shooting fire, goes off.  These two-go running towards the fire and the hose.

One of them I saw right away was a mage, he ran forward casting a spell, the spell exploded, orcs went down.  That was about the time I had the wagon brought up.  The farmers were in there, right?  Had to save them, Right?  So, I drove the wagon up and had it right outside the big doors.

This woman ran up, had to be a cleric, her name?  Sister Martin, or Martine, or Buttercup, I don’t know she used her sling, healed people, she was all over the place.  I think none of those sling bullets… Oh wait, I have a funny story about her, the cleric?  Fine I will wait to tell it when it is part of the story.

So, at this point, Cooper came back and called for re-enforcements.  I’m not sure what was going on.  I crept into the area, a lot of fighting was going on, so I think no one saw me.  Took a breath as the woman?  The cleric?  You remember how bad old Jubal was at using his sling?  I think she could give him a good run for his money.  She almost took out her mage buddy with a stone to the back of the head.  What was funnier?  The elf mage, Adrian?  He almost shot the guy too.  I am sure he thought there were foes in front of him and behind him.

Again, I watched as that big guy, Cob?  He walked into the chapel area after the thief did.  Now, I am not sure how it happened?  There was a glyph or something on the floor, the thief disarmed the trap and when that happened, all hell broke loose.  No one noticed the guards in the chapel, just the cleric.  It annoyed her, I can tell you.  Wotan said he felt spells going off.  Well one of them was a silence spell, and that helped nobody.

One guardian in the chapel?  Stabbed the big guy, Harald, almost took him out.  The other guardian types attacked the thief, Cob, and the big guy with the massive axe.  I swear it looked like a troll or giant axe.

Back to Ded?  He went forward past a statue, he saw that cleric had that under control.  Something was weird in that grass his feet got stuck.  Took some time, Adrian came up and cast a spell, did nothing.  Slitherer?  She cast a spell, probably in tune with the magics of the place, she got the man free.

The cleric, investigating the statue, she touched it?  EVIL, that was an Evil statue.  Somehow?  The cleric in the temple activated it, attacked the cleric and everyone around it.  Smiting was going on.  I swear that I saw the thing poke its horns at the thief?  He fumbled things right there, like he lost hand eye coordination or something.

Wotan ran in with his sword, cut down the guards and the others in the room captured the cleric, tied her up good.

Corvus, with that bow of his?  Shot the gargoyle monster dead or whatever you do to a thing like that.  Dead, dead.

Now the cleric?  She has had enough of this.  Got some oil from Cooper and pours it on the grass around the statue, gets ready to light it on fire?  Gets ready to toss the burning whatever thing she created out onto the oil-soaked grass?  Doesn’t work.  She is so worked up about the gargoyle monster thing, can’t concentrate.  Luckily though?

She does not burn herself up.

Seriously?  I cannot wait to find out what will happen next.

Roleplay for June 24th How things are Hexing all over

The End...How the Heroes of Silverton kill everything, get the gold, the girl...wait there is no girl...