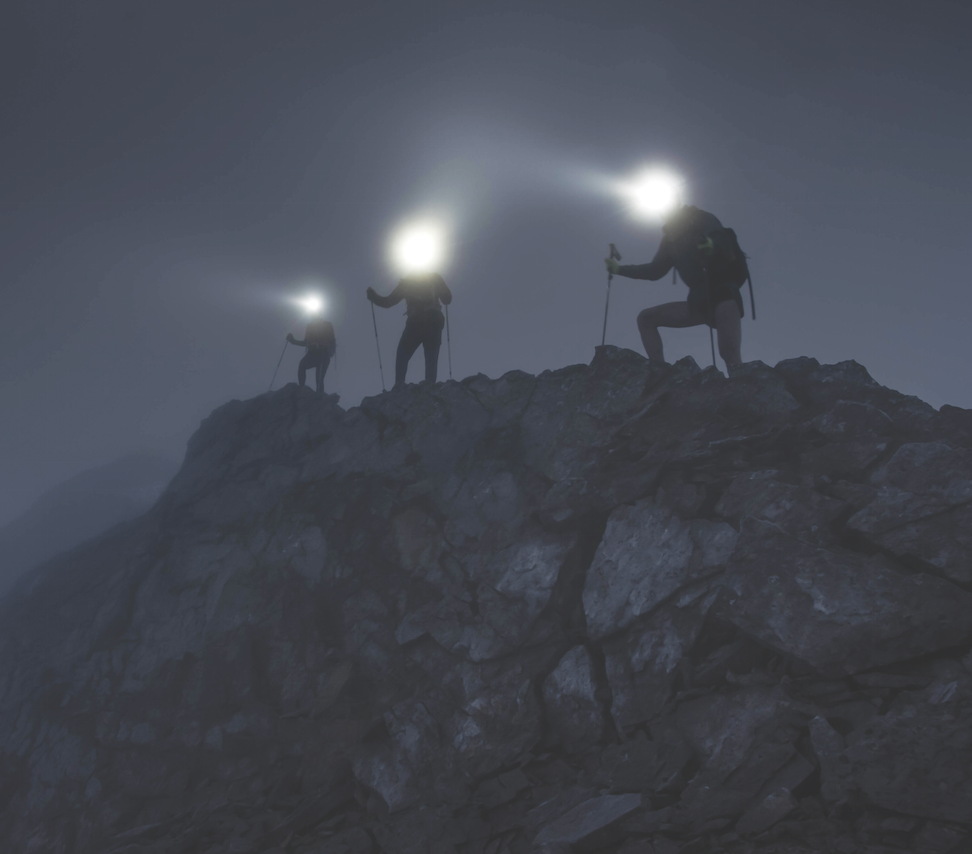 I saw the three of them looking down at me and all I wanted to do was kill them.  I also wanted to run away as quickly as possible since they’d also killed everyone else in the cabin last night.  Being the only one left alive leaves you with a sense of dread, your own mortality, and a very healthy respect for hiding.  I did feel like I was doing a pretty good job at hiding.

Why they wanted to kill me?  Absolutely no idea.   I couldn’t come up with any rationale why they would be in the cave system, no endless supply of water, food, or even a way out of here for me or them.  All those cave writings?  I could not imagine that they were important enough to kill over, it wasn’t like anyone had been able to translate them, Oh, maybe they had…  The only way to escape was back at the cabin and to use the only functional sky sled.  Oh, right, I had the punch card that they would need to shut off the anti-theft protocols.  Oops.

Watching the beams of light crisscross back and forth, they didn’t know where I was and I knew exactly where they were.  I supposed I might leave the punch card out for them to find, but then I would be stuck here instead of us all being stuck here.  They’d grow bored, leave, think me dead, they would leave?  Seemed to be an iffy if not overly optimistic approach to the problem, since I had the punch card it would seem a better chance they would come down here and search for my lifeless body, or worse, come across my still breathing one.

“She must have left” “What do you mean, left?  Do you think she decided that she needed new shoes and hopped onto her scooter and headed off to the shoe store?”  “It might happen?”  I listened as two of the members of the Brain Trust talked about and more than likely decided my fate.  I also heard a fist hitting someone in the stomach, I was able to reason that out by the amount of sound that was followed like a ‘whoosh’ like sound, one that I had visualized as a lot of air being pushed out of one of their mouths.

“Why did you have to go and hit me?” 2 gasped.  “Because you were being stupid?  I told you what would happen the next time you said something stupid, I like to keep my promises.”  Now there was a third voice at this point, so I mentally named them 1, 2, and 3 it simpler than using their real names.  I suppose that I might have easily named them Moe, Larry, and Curly too, I then would’ve argued about Shemp, I didn’t have the time.  “An argument with each other is not going to get the job done.  We need…”  The talking stopped as the cavern filled with a loud BANG noise, I realized that it was the sound of a gun going off.

“Why did you shoot him?”  3 asked 1.  “You pointed out what we didn’t need, and I didn’t need stupid.  You are the only one that can fly that sled, so shooting you would be stupid.”  Three replied with a slight chuckle “Well aren’t I glad that I’m a sled pilot?” I decided it wise not to mention my ability to fly the sled out.

The lights had stopped moving while the two spoke and I made my way down as far in the trench.  I had been in these caves, far longer than I wanted to admit too, with one of them out of the way, I had a way out now.  I’m going to take it and see what happens next.

I really hate my parents.