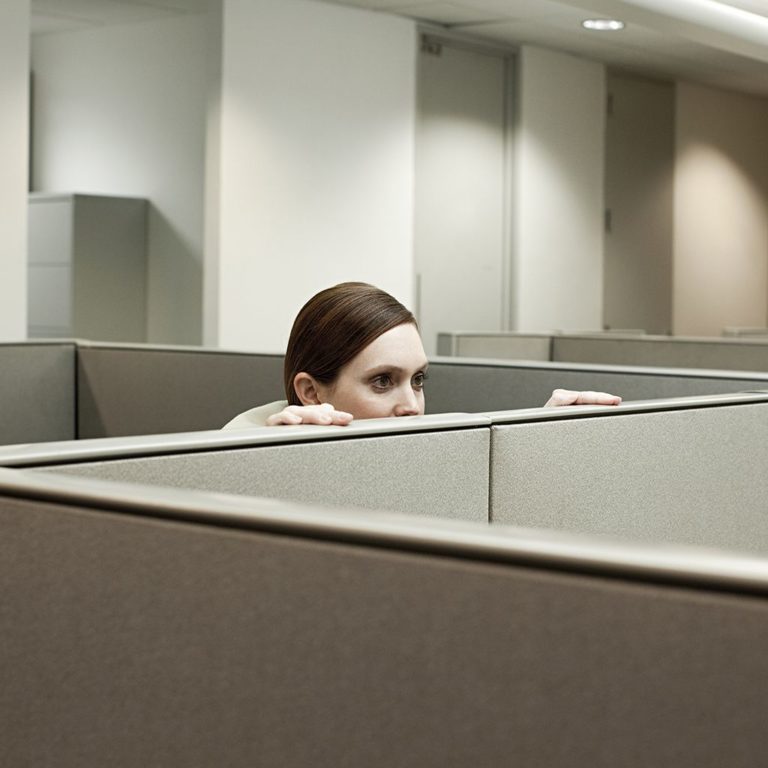 There was a noise by the elevator and something told me to move slowly.  I did not understand why.  I looked out the corner of my cubicle and across the way, Jen, the Team Lead for our department was doing the same thing.  She had her hands on the fake wall of her cubby and slowly she pulled herself up.  “Jen” I whispered to her, trying to get her attention.  I knew there was something terribly wrong going on.

A sound, something like an air pushed hard against something sounded in Jen’s cubicle.  I looked over; I wanted to ask her what it was?  Jen couldn’t answer me; they had blown her head off.  Her body drifted, like in some stop-action animation movie, until it hit the floor.  Blood flowed from her neck, from where her head used to be.  Her entire head was gone.

Mabel screamed, her cubicle shared a wall with Jen.  Her body, Jens hit into the fake cubicle wall and it fell forward into Mabel’s space.  Both of Jen’s arms also fell forward and Jens body looked like she wanted to wrap her arms around Mabel.  Jen had been about hugging.  Mabel had often needed a hug so there was not anything odd about that, except that Jen was missing her head.

“This is a drill, this is only a drill, please evacuate towards the stairs and then down the stairs and out of the building.”  A loud voice ordered us over the loudspeakers.  I wasn’t sure if I believed them.  Jen had lost her head after all a few moments before now.

Keith stood up at this point.  “Must be the monthly fire… Words cut short by that same air being pushed hard sound and his body fell to the floor.  The carpet in the area quickly became red instead of the usual off-white or oatmeal color.  The hole in Keith’s body was dead center, I had read somewhere that you wanted to hit a person with a bullet in the center of his chest, center mass.  It would be an obvious target and the best chance of hitting what you aimed to hit.

Not being able to see Keith’s body?  I could only guess that whoever is doing the shooting and whatever they are shooting with?  They are doing a good job of hitting whatever it was they were aiming to hit.

Screaming, yelling, pushing falling, panic, pandemonium were the words I would use to describe the next 15 minutes.  People were crawling over one another, people fell, trampled, hurt, bones were broken, people bled and cried on the ground.  Overall, those sounds were the sounds of that pressed air in the air and the thuds of a body after body falling to the ground with holes in them, holes where their life essence escaped, and their lives ended.

There was nowhere else for me to go except for right where I was, hiding under my desk.

Here I was huddling, my knees pulled up tight against my chest.  I felt that the thin black tie around my neck wanting to strangle me with how hard to catch a breath it seemed to be.  My chest constricted, the bones seem to want to constrict around my throat, heart beating 300 times a second, blood hot, it made my body sweat.  I felt sure anyone everyone could hear me breathing.  The sweat poured off of me in a river, there had to be a puddle of the stuff u8nder my desk.

The very idea I could sit in a puddle of my sweat was a fear.  I thought if I had so much perspiration, someone then would smell me out.  Dogs, they had to have dogs they would use to search people out hiding after whatever it was they were doing to everyone else.  There could not be any way in the world this floor is the heartbeat of the company.

I for the life of me did not understand what the company did, let alone give a reason for the taking of lives.  I filled out K-3-7 reports.  To be honest?  I didn’t have a clue what a K-3-7 report was.  I took a bunch of numbers from a C-16 and plugged them into a Victor-Romeo spreadsheet when those numbers finished crunching?  It was to compile those figures into a K-7 when the whole thing was done?  I had a K-3-7 report.

Those reports had gone off to Jen, now that Jen was dead I did not understand where I could file my reports.  Great out of a job again.  My parents would blame me, this thing going on?  My fault.  If I had not taken the later train, had not done this or that?  None of this?  None of it would be this created the chaos I found myself in now.

Barely able to see out of my glasses, the fog of whatever covering the lenses I took them off and shoved them into my shirt pocket.  My black pants, now covered in lint, old popcorn, blood, and probably some other things I did not want to think about.  Harald after Jen’s body fell to the floor I knew had lost his lunch, and it had been pretty spectacular to hear.

A phone rang in one cubicle, no one reached to answer it.  A part of me glad to know no one reached for it.  I wondered, the authorities were calling?  A customer?  Would they call back?  A moment later I heard something being ripped out of the wall.  I realized it was the phone cord from a phone forcefully removed.  The phone clattered into a trashcan after that and the hopes for words to get me out of this situation killed that thought.

“No one else has to die.  We are looking for Conrad Pepper, if Conrad Pepper would step forward now, we will leave the rest of you alone, you have my word on it.”

Now I had to wonder, do I think of ways to kill Conrad?  This was all his fault?  Or am I brave and stand up and explain why that can’t happen?  There also could be the solution, I stay right here, right where I am and do absolutely nothing.

Only Conrad could pick today, of all days, to call in sick.  Life really is a bitch.

I wrote this using the picture from Contest 91 from Writer's Digest. Picture is included